AAKG supplement dosage, safety, risks, side effects and benefits
How to best use these natural pills
August 27 2017 by Ray Sahelian, M.D.

AAKG contains arginine, a conditionally essential amino acid that has a number of vital roles in human biochemistry. Arginine plays an important role in the urea cycle, helping to rid the body of excess ammonia. This amino acid is also important in protein synthesis as well as for the support of healthy immune function. AAKG has arginine with alpha-ketoglutarate, another key player in amino acid metabolism, as well as in energy production.

What are the benefits of supplementation?

Int J Sport Nutr Exerc Metabolism. 2011. Effects of 7 days of arginine-alpha-ketoglutarate supplementation on blood flow, plasma L-arginine, nitric oxide metabolites, and asymmetric dimethyl arginine after resistance exercise. Arginine-alpha-ketoglutarate (AAKG) supplements are alleged to increase nitric oxide production, thereby resulting in vasodilation during resistance exercise. This study sought to determine the effects of AAKG supplementation on hemodynamics and brachial-artery blood flow and the circulating levels of L-arginine, nitric oxide metabolites (NOx; nitrate/nitrite), asymmetric dimethyl arginine (ADMA), and L-arginine:ADMA ratio after resistance exercise. Twenty-four physically active men underwent 7 days of AAKG supplementation with 12 g/day of either NO(2) Platinum or placebo. Before and after supplementation, a resistance-exercise session involving the elbow flexors was performed involving 3 sets of 15 repetitions with 70% of 1-repetition maximum. Data were collected immediately before, immediately after (PST), and 30 min after (30PST) each exercise session. Data were analyzed with factorial ANOVA. Heart rate, blood pressure, and blood flow were increased in both groups at PST but not different between groups. Plasma L-arginine was increased in the NO(2) group. NOx was shown to increase in both groups at PST) and at 30PST but was not different between groups. ADMA was not affected between tests or time points; however, the L-arginine:ADMA ratio was increased in the NO(2) group. NO(2) Platinum increased plasma L-arginine levels; however, the effects observed in hemodynamics, brachial-artery blood flow, and NOx can only be attributed to the resistance exercise.

I have read information from different websites. One site says, "Dramatically Increases Nitric Oxide Production For Increased Muscle Pump! AAKG is arginine alpha-ketoglutarate in a sustained release formula which is pH buffered to ensure maximum absorption. Arginine released into the bloodstream will dramatically increase nitric oxide production. An increase in nitric oxide may lead to the following benefits: extended and enhanced "muscle pump" after training, improved endurance and recovery time, improved workout capacity, and increased sexual vigor." Is this statement true?
A review of Medline revealed two human studies with AAKG supplements and the results appear promising, I await results of a couple of more studies to have a better idea of the benefits and side effects.

Q. I read a study which says, "In fact, participants that took AAKG prior to exercise had compromised endurance and strength. Because AAKG supplementation may hinder muscular endurance, the use of these supplements before resistance training should be questioned."
A. I am not sure which study you are referring to, but, as of 2016, I am still awaiting more data on this supplement before recommending it wholeheartedly.

ALS, amyotrophic lateral sclerosis
PLoS One. 2014. Metabolic therapy with Deanna Protocol supplementation delays disease progression and extends survival in amyotrophic lateral sclerosis (ALS) mouse model. Besides motor neuron degeneration, ALS is associated with impaired energy metabolism, which is linked to mitochondrial dysfunction and glutamate excitotoxicity. The Deanna Protocol (DP) is a metabolic therapy that has been reported to alleviate symptoms in patients with ALS. In this study we hypothesized that alternative fuels in the form of TCA cycle intermediates, specifically arginine-alpha-ketoglutarate (AAKG), the main ingredient of the DP, and the ketogenic diet (KD), would increase motor function and survival in a mouse model. ALS mice were fed standard rodent diet, KD, or either diets containing a metabolic therapy of the primary ingredients of the DP consisting of AAKG, gamma-aminobutyric acid, Coenzyme Q10, and medium chain triglyceride high in caprylic triglyceride. Targeting energy metabolism with metabolic therapy produces a therapeutic effect in ALS mice which may prolong survival and quality of life in ALS patients.

Asthma testimonial
Email - I had chronic bronchial asthma caused by histamine, because I'm allergic to the same substance. Bodybuilding train, and takes some supplements, but noticed a significant improvement when I take arginine alpha-ketoglutarate.

High blood pressure
Q. I am taking L-Arginine AAKG powder, 6 grams/day, plus 1600 mg of L-Citrulline/day. I read that one should not consume Arginine AAKG for continuous, high level use for more than 60 days. Would I be in danger if I took AAKG on a continuous basis? If so, what would be my symptoms? And if so, what would be my alternative, since I take it to lower my blood pressure, only. Would free-form L-arginine be better for long term use ?
A. Long term studies are not available to determine the full safety or side effect profile of these supplements.

Immune system effect
Does an increase in NO in the body product damaging free radicals if one takes AAKG. I have taken this supplement before and if too much is taken by me I get a cold sore.
A. It's difficult to say since I have not seen research regarding its influence on the immune system.

Safety, risks, side effects, danger
AAKG side effects have been reported as case studies in medical journals. 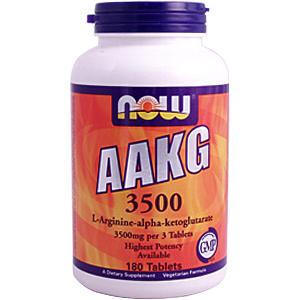 Suggested Use: As a dietary supplement, take 2 or 3 tablets once or twice daily on an empty stomach, preferably in the morning and one hour before workouts. Not recommended for continuous, high-level use for more than 60 days.
Buy AAKG supplement on sale

NOW AAKG has paired arginine amino acid with alpha-ketoglutarate, another key player in amino acid metabolism, as well as in energy production. Consumers will find that NOW AAKG compares favorably to similar products on the market, but with the additional benefit of a 3500 mg dose and value pricing.