Devil's Claw herb supplement side effects and benefit, herbal extract use for arthritis and for inflammation management
October 1 2016 by Ray Sahelian, M.D.

Devil's claw (Harpagophytum procumbens), is a plant widely used in South African traditional medicine, specially by Bushmen, Hottentots and Bantu. Extracts of Devil’s claw roots are widely used in Europe for rheumatic pain. Two of the active principles of Devil’s claw are harpagoside and harpagide. The mechanism of action of Devil’s claw is still unclear and disputed, however one study has found a correlation between serum harpagoside levels and the inhibition of leukotriene biosynthesis. The plant’s common name is attributed to its peculiar claw-like seedpods which are covered with small hook-like protuberances. 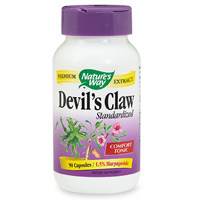 Harpagophytum procumbens has a large claw-like fruit and is also called Grapple Plant. The root or "tuber" is considered medicinal and is preferred by herbalists because of its high concentration of the beneficial component harpagoside.

Joint Power Rx Because joint pain is so debilitating, glucosamine and chondroitin are not enough. This powerful formula includes several additional herbal extracts and nutrients that play a role in joint health.

Life Sci. 2015. Chondroprotective effects of a new glucosamine combination in rats: Gene expression, biochemical and histopathological evaluation. This study investigates the effect of a new combination of glucosamine hydrochloride, chondroitin sulfate, methylsulfonylmethane, Harpagophytum procumbens root extract (standardized to 3% harpagoside) and bromelain extract on formalin-induced damage to cartilage tissue in the rat knee joint and evaluates this combination in comparison with another combination of glucosamine hydrochloride, chondroitin sulfate and methylsulfonylmethane.

Devil's Claw herb benefits
This herbal extract may be helpful for those who have chronic non specific low back pain.
Devil’s claw may reduce the need for analgesic and non-steroidal anti-inflammatory therapy in those with knee or hip osteoarthritis.
In rats, the dried crude methanolic extract caused a significant dose-dependent reduction of arterial blood pressure, and had anti-arrhythmic effect.

Dr Oz said in show that devil's claw comes from Victoria Falls which is found in Zimbabwe, South Africa. It is a Natural Health remedy to reduce swelling and inflammation - similar to Aspirin or Ibuprofen. Bryce Wylde said that it should not be confused with cat's claw. Devil's claw is used to relieve back pain and arthritis by reducing the inflammatory response.

Devil's Claw side effects, safety, toxicity
Mild and infrequent gastrointestinal symptoms have been reported, but since Western doctors have not used devils claw much, we still don't know the full range of side effects and risks if this herb is used for prolonged periods.

Devil's Claw dosage
The usual dose is 400 to 500 mg of the dried extract three times a day. Another option is the use of 20-50 mg harpagoside.

Effectiveness of Harpagophytum extracts and clinical efficacy.
Phytother Res. 2004.
Various preparations from Devil's claw are used for the treatment of pain in the joints and lower back. Studies published in peer reviewed journals were examined for their clinical evidence. The studies offering preparations with 50-60 mg harpagoside in the daily dosage are of better quality and provide more reliable evidence on efficacy than a proprietary ethanol extract with half the amount of harpagoside per day. However, confirmatory studies are required for all devil's claw extracts before they can gain a place in treatment guidelines.

Evaluation of acute and chronic treatments with Harpagophytum procumbens on Freund's adjuvant-induced arthritis in rats.
J Ethnopharmacol. 2004.
Devils claw acts by way of interleukins and leukocyte migration to the painful and inflamed joint area. Chemically, its secondary tuberous roots contains iridoid glycosides, harpagogide, procumbide, and harpagoside, as the active principle. The purpose of the present study was evaluate the therapeutic potential as anti-inflammatory and analgesic agent in rat model of Freund's adjuvant-induced arthritis both in the acute and chronic phases. The animals were injected with Freund's adjuvant in sub-plantar tissue of the right posterior paw and randomly assigned in acute (25, 50, or 100 mg/kg) or chronic (100 mg/kg) treatments with Devils claw solution test or vehicle. Then, submitted to behavioral test and assessment of body weight and right paw's measurements. The results show that Devils claw extract increased the animals 'latency of paws' withdrawal, indicating a protective effect against the pain induced by the thermal stimulus, both in acute and chronic treatments. In addition to reduction in the right paw edema in the experimental groups when compared to control group. Thus, the data showed anti-inflammatory and peripheral analgesic properties of Devils claw extract with all doses tested, thus confirming its indication for inflammatory processes.

Treatment of patients with arthrosis of hip or knee with an aqueous extract of devil's claw.
Phytother Res. 2003.
Preparations made from the secondary tubers of Devil's claw are successfully used in patients with rheumatic diseases (arthrosis and low back pain). In order to add data on the efficacy and long-term safety of an aqueous extract (Doloteffin; 2400 mg extract daily, corresponding to 50 mg harpagoside), which has been tested successfully in patients with low back pain, an uncontrolled multicentre drug surveillance study for about 12 weeks was conducted in 75 patients with arthrosis of the hip or knee. Although this was an open clinical study, the results suggest that this Devil's claw extract has a clinically beneficial effect in the treatment of arthrosis of the hip or knee.

Can devil's claw supplement be taken the same day as saw palmetto herb or lipoic acid? What about using it with Lyprinol marine lipid extract? Lyprinol New Zealand mussel extract for arthritis and asthma.
Probably, but we don't have research to know for sure. Keep dosages low. It can also be taken in combination with a prostate formula called Prostate Power Rx.

Some recent studies mentioned on web md had some very good results with devils claw supplement on muscular pain. Balch in her books says devils claw supplement should be taken in the form of an enteric coated pill so the active ingredients can be carried to the small intestines so they will not lose activity due to the acidic gastric juices in the stomach. What is your theory on this? should one try the enteric coated capsules of devils claw if one can find these little burgers?
We have not seen any long term human studies with devil's claw, and we have not seen any studies comparing regular devil's claw capsules with enteric coated. Therefore, to claim devil's claw capsules should be taken as enteric coated is premature and not based on solid fact.

Does devil’s claw root supplement increase appetite? Is it sometimes used to treat anorexia?
All the studies thus far that we have seen with devil's claw involves the role of this herb in joint problems or arthritis. Therefore, we are not aware of studies looking into the influence of devil's claw on appetite. Historically, devil's claw has been used as a traditional treatment for fevers, skin complaints, arthritis and diseases of the digestive tract as well as an appetite stimulant.

Devil's claw study review
The researchers have taken great pains to look for the various constituents of the devil’s claw herb and to determine which of these compounds have a role to play in the anti-inflammatory response of this herb. I like the comprehensive approach that is being taken. Although many herbs are thought to be safe on preliminary evaluations, when used in practice in actual patients, previously unknown side effects become apparent, particularly in older individuals who are often on multiple medicines. In the case of patients with joint problems, many may be already taking glucosamine, chondroitin, other supplements, NSAID, heart medicines, etc. Therefore it is a good idea to look into anti potential effect of devil’s claw on heart function and heart rhythm, along with its effect on gastric mucosa since the use of the herb with NSAID may be common in clinical practice.
This study has a great deal of significance since inflammation is a major contributor to a number of diseases, including those that influence joint health and function. There are currently several nutrients and herbs used for joint health including glucosamine, chondroitin, cat’s claw, MSM, CMO, curcumin, and others. Devil’s claw appears to be another herb that could play a role by itself or in combination with other supplements used for joint health. It is important to determine the role of this herb and its extracts in the various inflammatory pathways in the body. While determining the various biochemical influences of devil’s claw substances on inflammatory processes, it is important for researchers to assess other aspects of the animal’s behavior and overall health. As a clinical practitioner using various herbs in my practice, I sometimes realize that many of these herbs have influences beyond what we are looking for. For instance, in the case of devil’s claw, it is important to not only measure and determine the various inflammatory molecules that are influenced by the extracts, but to also monitor some of the following physiological influences: Is the extract influencing behavior such as mood, restlessness, energy level, sleepiness. Is the extract influencing sleep patterns? What about heart rate and heart rhythm? Often I find in my practice that certain herbs, when used in high dosages, speed heart rate or cause restlessness, anxiety, increased blood pressure, and some cause insomnia. Therefore one has to look into the overall clinical effect of this herb as opposed to primarily blood markers or tissue pathology.